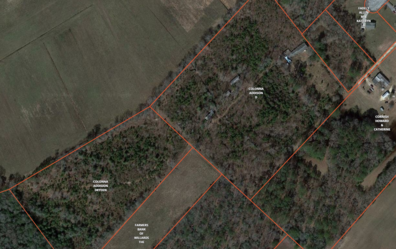 Pursuant to Order of the Orphan’s Court for Wicomico County, Maryland, the undersigned Personal Representative of the Estate of Addison D. Colonna will offer the following described parcels of real estate for sale to the highest bidder at public auction to be held at the front steps of the Wicomico County Circuit Courthouse, North Division Street Entrance, 101 North Division Street, Salisbury, Maryland, on

Three parcels of land situate in Fruitland Election District of Wicomico County, Maryland, along and binding upon a twenty foot (20’) road extending in a westerly direction from Sharps Point Road, more particularly described as follows:

ITEM ONE:    All that lot or parcel of land situate as aforesaid and in the Town of Fruitland, located approximately 600 feet Westerly of the Sharps Point Road and bounded on the Westerly side by other lands of Addison Colonna described herein as Item Two, having a frontage on said 20 foot road of 173.50 feet and containing 1.199 acres of land, more or less, as more particularly shown and depicted on plat entitled “Property Survey for George A. and Irene Colonna,” dated July 18, 1966, and recorded among the Land Records for Wicomico County, Maryland, at Liber J.W.T.S. No. 639, Folio 185; being the same parcel of land conveyed to Addison Dryden Colonna by Item One of a deed from Don E. Richardson dated February 18, 2005, and recorded among the aforesaid Land Records at Liber M.S.B. No. 2369, Folio 250.   [Map 800, Parcel 2144 – Tax Account No. 16-004847].

TERMS OF SALE:   Each parcel will be sold separately to the highest bidder at public auction, with the bids reserved.  The parcels will then be offered for sale together as a single unit, with the bid reserved.   The parcels will be sold pursuant to the method of sale which generates the highest and best overall price, and that bid or those bids will be accepted, as the case may be.  The Buyer(s) will be required to tender on account of the purchase price at the time and place of sale cash, certified funds, or check acceptable to the undersigned, in the amount of Two Thousand Dollars ($2,000.00) per parcel.  The deferred portion of the purchase price shall be evidenced by the Promissory Note of the Buyer(s), bearing no interest provided settlement is made and the full price tendered on or before thirty days after the date of sale; otherwise the deferred portion of the purchase price shall bear interest from the date of sale at the rate of six percent (6%) per annum.  Neither the Personal Representative nor the auctioneer make any representation or warranty concerning the properties, the same being sold “as is”; and, if for any reason the Substitute Trustees are unable to deliver good and marketable title to the real estate, subject only to easements, rights of way, covenants and use restrictions of record, the sole and exclusive remedy of the Buyer(s) shall be a refund of the deposit money.  Neither the Personal Representative nor auctioneer are aware of any violation of any federal, state or municipal environmental law or regulation; however, in the event any such violations exist, they are not responsible for same.  All settlement costs, including, but not limited to, document preparation, recordation and transfer taxes, including agricultural transfer tax, if any, recording costs, and title examination, if any, shall be the obligation of the Buyer(s).  State, County, and municipal property taxes and assessments, shall be adjusted as of the date of sale.   Buyer(s) shall be entitled to possession upon final settlement and payment of the purchase price in full, which shall occur not later than thirty days after the date of sale, time being of the essence.

FOR PUBLICATION IN THE DAILY TIMES